When Will Electric Scooters Be Street Legal in the UK?

Previous Next
When Will Electric Scooters Be Street Legal in the UK?

Things are changing daily here in the UK and where you might not agree with every decision made by Parliament, there are some items that are going to drastically enhance mobility of citizens. E-Scooters have been available for many years in the UK, but have yet to be allowed to roam the streets of major cities. However, things are thankfully changing in the E-Scooter sector of transportation. Parliament is finally seeing the validity in this advanced form of transportation and here is when electric scooters will be legal in the UK.

On January 20th, 2022, the first of many debates regarding electric scooters began. During this debate, deadlines were established for making a decision on electric scooter legislation. Parliament decided on Spring of 2022 as the ultimate deadline to finalize the report. By the deadline, officials are supposed to lay out regulations on traffic safety, speed requirements, and when and where e-scooters will be allowed. Although the comprehensive picture has yet to be developed by this stage, January 20th, was a significant stepping stone for electric scooter legislation to begin to form.

The Benefits of Electric Scooters

Carbon emissions have drastically increased greenhouse gasses and made air in largely popular areas remarkably difficult to breath. The more gas powered vehicles on the road, the worse the problem will get. However, the ability to provide everyone with an electric vehicle for transportation of their entire family is simply out of the question at this point. Legislation on reducing carbon emissions has been remarkably limited due to this growing conundrum.

Electric scooters provide a great Segway from the debate. The devices are able to be massed produced quickly and have the potential to drastically reduce carbon emissions as single riders can choose this amazing transportation option. Powering a single E-Scooter is far more economical than powering an entire car. Additionally, power stations required for full scale electric vehicles are expensive and difficult to maintain in our current economy.

Electric scooters carry far more advantages than other forms of transportation. They provide a motorized way to get from place to place and with current technology, they are able to keep up with traffic on roadways. The compact, yet functional design of electric scooters even makes them remarkably portable. Ideally, individuals that have an e-scooter in the back of their regular vehicle will never have to worry about being stranded in the event of a break down. The benefits of electric scooters far outweigh any possible negatives and thankfully, legislators are finally seeing the validity in their use.

An Increase in Purchases

The notion of an electric scooter may have began as a novelty item for children, but with so many notable benefits to transportation needs throughout the UK, evolution was inevitable. Government entities, during the January 20th debate, noted the increase in purchases for both recreational and necessary uses. Those who have invested in electric scooters can miss out on their benefits if they are banned in the UK.

The uptick in purchases has allowed government officials to see the validity in electric scooters and the many benefits they provide. Some have floated the notion of banning e-scooters completely, but with all the support for implementing regulations and allowing them to be used on public roads, it is highly unlikely a complete ban will take place.

Road legal motor vehicles come under specific categories that allow them to be properly tagged, licensed, and managed by transportation officials and owners. Electric scooters do not fit into any notable category and instead of trying to place them in one, government entities are looking into placing these vehicles in their own category. Officials are looking at how other countries have successfully implemented e-scooters into their transportation model and taking notes for the success of UK’s adoption of electric scooter transportation on roadways.

Additional debates will most certainly follow, but at the February 8th debate regarding the use of electric scooters on public roadways in the UK, the subject of illegal use was brought up. Currently, the use of e-scooters on public roads is illegal in the UK, yet so many still use these devices as standard forms of transportation. A crackdown on illegal use has been discussed, but is unlikely to take hold as the debate heightens the many benefits of this form of transportation.

Will Electric Scooters Become Legal in the UK for Public Road Use?

At the moment, e-scooters are illegal to operate on public roadways, but legal on private land. Where it may take some time to the government to work out intimate details of the debate, they are continually working toward making a legal avenue for e-scooters to be ridden on our public roads. This is great news for all of us eagerly waiting the decision, but time will tell when the debate will finally come to the right conclusion. Until then, ride your electric scooter with caution and primarily on private land or you may face fines associated with riding them on public roadways. More decisions will be made Spring 2022. 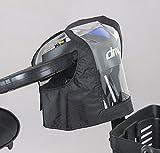 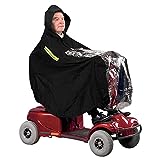 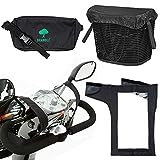 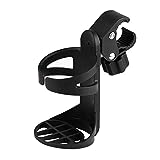 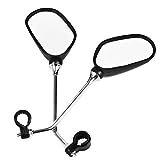 TekBox Pair of Oval Bicycle Bike Mirrors with...
Bestseller No. 8 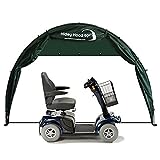 Mobility Scooter Covers | Cover for Outside...
Bestseller No. 10 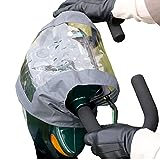